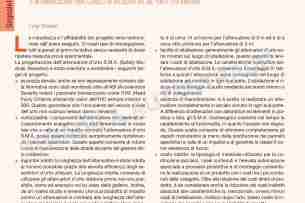 On Safety&Security Supplement of March/April 2013 you can read an article dedicated to S.M.A. crash cushions. The title of the article is: Barrier Safety First.
SMA (Safety Modular Absorber) crash cushion: the first redirective crash cushion designed and made in Italy

Industry A.M.S. srl has designed and patented a family of redirective crash cushions able to stop a vehicle from 50 Km/h up to 110Km/h. Recently it also get the CE certification for the parallel version, whereas for the V-shaped version the experimental tests are now running.

A robust design approach is utilized indeed until now the SMA (Safety Modular Absorber) crash cushions have successfully passed twelve experimental tests, each one at the fist attempt. This witnesses the reliability of the project. In figure 1 the family of crash cushion is displayed for the levels of velocity of 50, 80, 100 and 110 Km/h.

The design of the SMA crash cushion was oriented to match the following targets:

The problems involved in the development of a crash cushion can be schematized as the problem to stop a certain mass moving at an initial velocity V0 in a certain space S.

The European normative EN 1317 defines a limit for the maximum deceleration of the vehicle during the impact of a crash cushion through the definition of the ASI parameter.

Industry A.M.S. srl has developed and patented a crash absorbers with high efficiency as defined according to equation (1). The crash absorber consists of a metallic honeycomb made using a stamping and welding technology from metal sheets. The process of fabrication of the steel honeycomb panels is completely automatic and allows using these panels in all the situations where a low cost is required.

The force versus displacement curve reported in Figure 2 is like to a step function, this means that the steel honeycomb behaves almost as a perfect energy absorber. This aspect is of a particular relevance looking at the biomechanical parameters that allow evaluating the injury of the driver during a impact. As long as the deceleration diagram does not present peek the biomechanical parameters, like the head injury criteria (HIC), are constrained to values such that the driver experiences no severe injury. Furtermore, the efficiency of the energy absorbed is calculated to be about 0.92 (92%). This high efficiency allows the construction of crash cushion with a very small length according to equation (2). The minimum length of a crash cushion can be easy calculated from equation (2) assuming an efficiency of 100%. This means that a perfect and ideal crash cushion could be shorter than the SMA one of only 8%.

Crash cushions for impact velocities of 50 km/h, 80 km/h, 100 km/h and 110 km/h have been designed using as the steel honeycomb energy absorber. Due to the high efficiency of the utilized energy absorber we were able to reduce the size of the crash cushions to 2.0 m, 3.3m, 5.1m and 6.5m for the 50 km/h, 80 km/h, 100 km/h and 110 km/h, respectively. It shall be pointed out that the above mentioned lengths coincide with then operative lengths and consequently the SMA crash cushion can be placed near the obstacle to protect: no additional space is required to install the crash cushion.

In the figures 4a-4c some images get from the homologation test TC.1.3.110 in three different instants are reported. This crash test is the more severe one in terms of energy, mass and velocity of the entire family. The deformation of the crash cushion occurs progressively and tardily without abrupt variation of the motion of the vehicle. The figure 4d shows that, after the impact, the cockpit is almost undeformed so that the vehicle door can be easy opened by the driver. This feature together with the results in terms of biomechanical parameters allow concluding that the driver, after an impact at 110Km/h with the SMA crash cushion, will be able to leave the car with his legs without waiting the help of the relief people.

In the figure 5 the ASI diagram versus time is reported for both the experimental and the numerical test. It should be noted that the numerical calculation are able to predict pretty well the experimental behaviour of the crash cushion, indeed the two curves reported in figure 5 are almost superposed. Furthermore the ASI curve is very flat without any peak. This feature excludes the possibility to get peaks in the deceleration diagram that could jeopardize the safety of the driver.

The results in terms of deceleration of the centre of mass of the vehicle obtained during the twelve crash test carried out at the CSI spa proving ground have been used to calculate the head injury criteria (HIC). The HIC has been obtained through a numerical simulation of the sled test with a hybrid III dummy. HIC is a biomechanical parameter based on the acceleration diagram of the centre of gravity of the dummy. It has been showed that the HIC is well correlated to the head injury of the driver. The results of these calculations in terms of HIC versus ASI are reported in figure 6 together with the diagram of the MAIS (Maximum Abbreviated Injury Scale) versus the HIC. Figure 6 clearly show that the calculated HIC is always lower than 200 irrespective of the crash test type and that the MAIS is at most equal to 2 (with a probability of 20%). This last feature excludes severe injury of the driver.